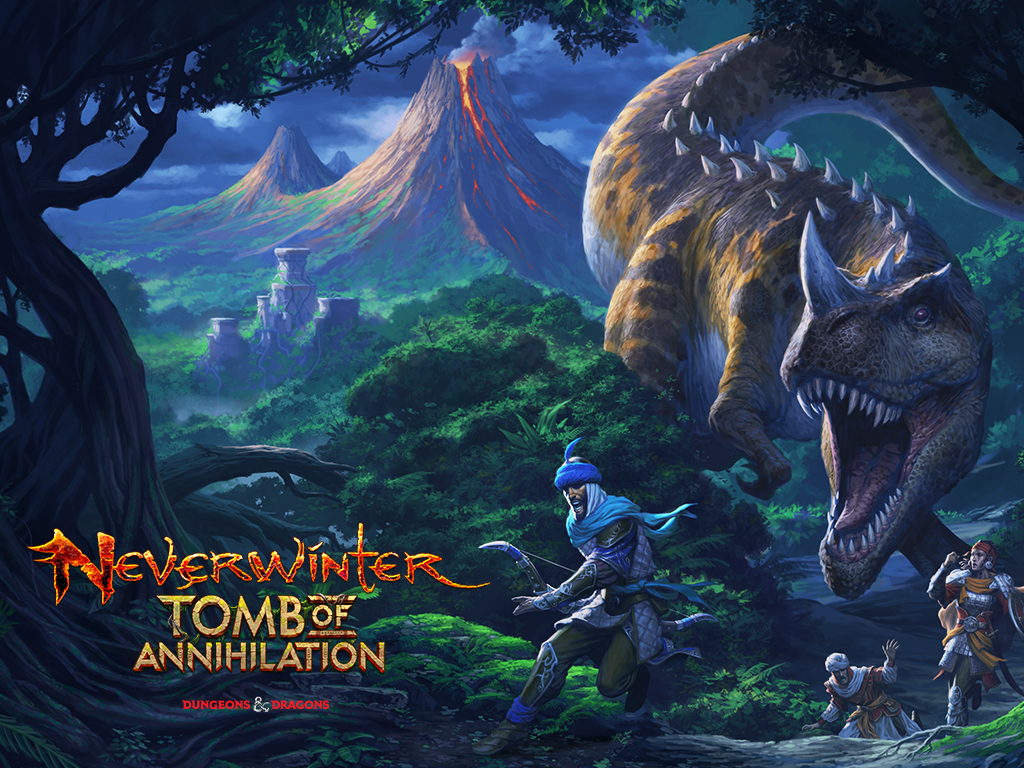 Neverwinter is a 3D action MMORPG set in the epic Dungeons and Dragons world of Forgotten Realms. Iconic locations such as Baldur’s Gate, Icewind Dale, Neverwinter, and more await players in this story-driven MMORPG. The game features skill-based combat that requires players to aim individual attacks and dodge incoming attacks.

Enter the world of Neverwinter, a fantasy world based on the iconic Dungeons & Dragons RPG. Fast-paced combat, immersive role-playing, as well as epic stories and adventures await heroes who dare to roll the dice. Take your pick from 13 unique races, each with different racial bonuses, and step into the shoes of seven playable classes. Journey through the magical world by following the path laid out for you or take full control of your destiny and of those around you by creating unique adventures, missions, and even full campaigns based on stories and maps of your own design. https://www.arcgames.com/en/games/neverwinter 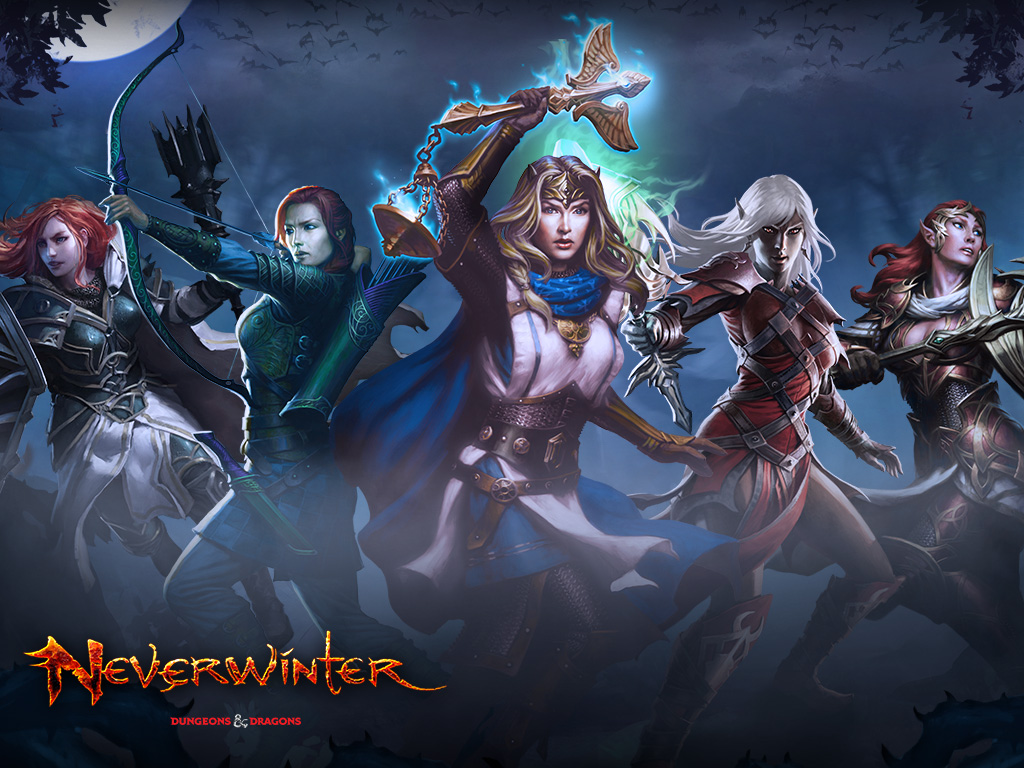 As soon as players start the game they are treated to an awesome cinematic showing the battle between Valindra and the defenders of Neverwinter. After the action-packed intro movie, players then get to create their characters. Players can pick from one of 13 unique races each with their own racial bonuses. Yes folks, 13! However, four of these are only available to players who purchase Founder packs. Players then pick from seven classes, with an eighth class soon to be released. While the racial bonuses do complement certain classes, there’s nothing to stop players from creating a Dwarven Control Wizard if they choose to.

Neverwinter’s customization is pretty solid, if you don’t mind cartoony graphics. Players can choose from a variety of pre-made face, hair, and body types. They can then customize their characters further by adding scars, tattoos, and make up. They can also tweak their characters even more by using sliders for features such as nose height, arm length, leg width, and the all-important breast size. As a game that focuses heavily on role-playing, players also get to pick their characters hometown and affiliations and even write their own background story which can be viewed by other players. This doesn’t have any bearing on gameplay, but it does add a little depth to the game. The game also allows duplicate names and spaces in names to prevent names like MarckyxOxO that could ruin the role-playing aspect of the game.

Players are dropped into the world just outside Neverwinter city gates. A tooltip style tutorial complete with voice-overs helps players get acquainted with how things work in the game. The tooltips pop up whenever players encounter something new. Unlike other MMORPGs with worlds spanning continents or even planets, Neverwinter is mostly set in the city of Neverwinter and its surrounding areas.

Neverwinter’s graphics and environment are absolutely breath-taking and everything looks epic. The world is rich and detailed. The sprawling city is bustling with people talking and walking around. The ambient music fits the theme perfectly and actually made me think about jousting knights and medieval feasts. Outstanding voiceovers from NPCs also add to the immersion. Fans of the Forgotten Realms world should be pleased, as the game features iconic locations like Baldur’s Gate, Icewind Dale, and more.

The Life of a Hero

Neverwinter is a strong story-based game with quests that actually make you feel like you’re accomplishing something (unlike most MMORPGs that send players out on killing sprees for trivial reasons). That doesn’t mean that there aren’t kill quests – it just doesn’t make up the bulk of quests. Plus, the reasons for killing something are actually pretty believable. Some quests can even be completed without killing a single mob. The game’s quest objectives range from the typical kill-and-collect quests to planting evidence in order to start gang wars.Quests reward players with experience points, money, and gear. Getting a character to max level (currently 70) is a bit slow and the bulk of a player’s experience points will come from quests. Players can also take on quests made by other players via the Foundry system by visiting NPCs found in most areas. Players can create their own stories, maps, quests, and even full campaigns once they reach Level 15. 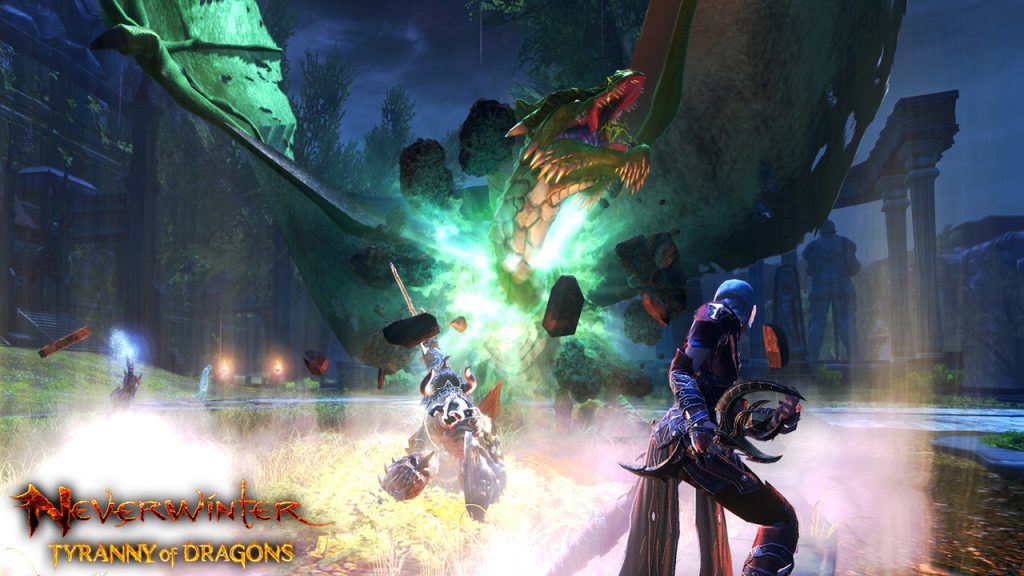 The game’s Foundry is easily its best feature. Even though most people won’t be making their own adventures, they can enjoy the the adventures created by the Neverwinter community. Players actually gain experience points, loot, and other rewards for completing foundry missions, so they always worth checking out. The mechanics of these foundry missions are quite simple. These adventures range from mindlessly fighting off huge waves of enemies to stories of political intrigue and skullduggery. These player-made adventures can easily be sorted by popularity, length, and other criteria. I found myself quite immersed in a few story-driven multi-part adventures. Some folks REALLY put a lot of effort into their adventures and it really shows. If you’re ever bored of the main dungeons / quests, the player-made ones give Neverwinter infinite replay value.

Combat in Neverwinter is fluid and fast-paced. The game’s combat system requires players to aim their attacks at enemies while using the WASD keys to move around. The game does away with the traditional hotbar in favor of less Carpal-Tunnel-inducing hotkeys. Players use Q,E,R,1,2,Shift, and Tab to use abilities. Mobs also have “tells” that warn players to get out of the way. Aside from the “tells,” an indicator also appears on the ground to show where the attack will land. The “tells” would have been enough in my opinion, since adding the indicators just makes things a little too easy. The game sort of makes up for this by removing Hit Point regeneration entirely. To regain HP, players can either use potions or stand near marked campfires which are conveniently scattered all over Neverwinter.

Neverwinter players unlock skills called “Powers” automatically upon reaching certain levels. Powers can then be improved by spending skill points that characters receive when they level up. More powers can be unlocked by spending a set number of skill points in improving skills. Players also select their Paragon Path or specialization when they reach Level 30, which opens up more skill options. Skills can be reset by using an item that can be bought using real world money. Aside from Powers, players also have class skills that allow them to gather materials limited to their class. Players can also pick up “kits” that allow them to gather materials reserved for other classes. Unlike some MMORPGs, Neverwinter’s hotbar is limited to only a handful of skills, so players will need to choose where they allocate points to wisely. There’s no point in maxing out more than two “at-will” abilities, as only two can ever be “equipped” at once. Between feats, powers, and paragon paths, there’s a good amount of variety in character growth/customization. 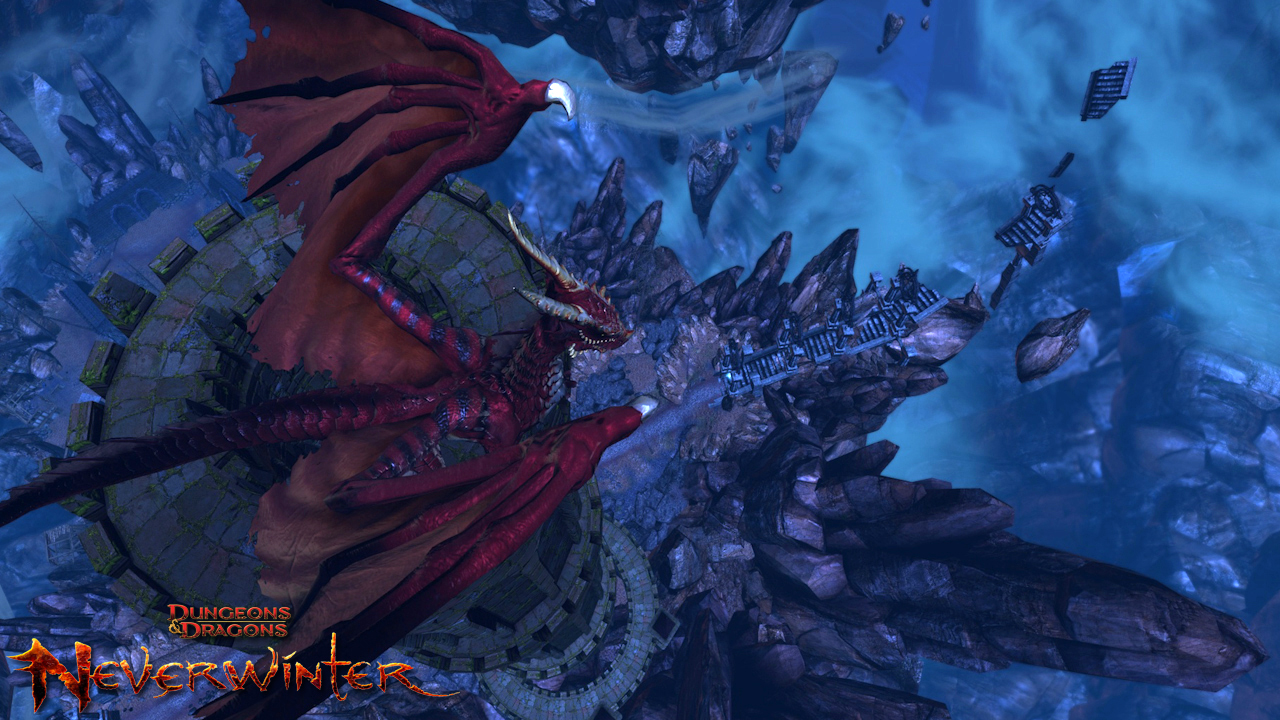 While Neverwinter is largely focused on lore and roleplaying, it still has a PvP system available for players hungry for blood. PvP, however, is limited to arenas. Currently, Domination is the only available arena where five players fight for control of territory against five other players. The first team to reach 1000 points wins the match. Players are awarded Glory Points for participating in PvP matches. Glory Points can be used to buy PvP gear.

Neverwinter’s item mall contains an assortment of items such as mounts, refining stones, boosts, additional inventory space, and additional character slots. Players purchase items using Zen, which can be bought with real-world cash or Astral Diamonds. None of the items are game-breaking, but they can make things easier for players with some extra cash lying around. Costumes are also available to make your character stand out from the crowd as well as dyes to change the color of your armor.

Aside from gold, Astral Diamonds are another form of in-game currency. Astral Diamonds, however, are much harder to come by than regular gold. Players can acquire Rough Astral Diamonds by participating in events, high level quests, and by praying to the gods (Invocation). Invocation is unlocked by completing a quest at level 11. This gives the players the ability to pray to their gods at campfires, altars, or by visiting an NPC in the Protector’s Enclave. Invocation rewards players with experience points, items, or stat boosts. Additionally, Invocating the Gods rewards players with one Ardent Coin and Celestial coin per day as well as Rough Astral Diamonds the first three times a players uses Invocation on that day. 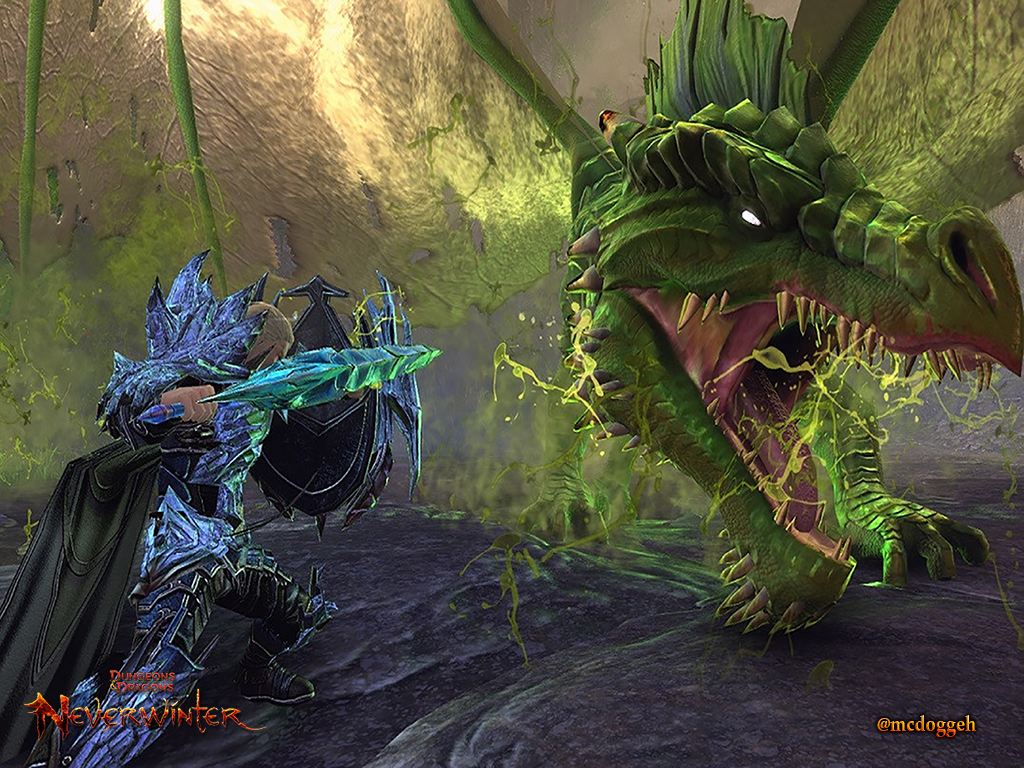 Unlike most MMORPGs, Neverwinter players aren’t limited to just one or two professions. They also don’t have to visit NPCs to learn new recipes. Professions are unlocked by completing a quest at Level 10. Upon completing the quest, all players have to do is hire the appropriate craftsmen, have the necessary resources and tools needed, and have available Profession slots to do it. Players can have up to nine slots while resources can be gathered by using class skills or kits on nodes scattered around the game world. Tasks may also have Profession level requirements. Tasks take some time to complete, but runs even when the player is offline (think Farmville). Players gain Profession experience by completing tasks that reward experience for that profession. Additionally, completing tasks from the Leadership Profession rewards players with Astral Diamonds, although tasks in this profession do take considerably longer to finish than the others.

Neverwinter is a great game with stunning visuals, excellent music, and vast customization options. The game’s focus on roleplaying, lore, and content is definitely a breath of fresh air from the generic MMORPGs available today. However, the game’s lack of PvP options will probably deter hardcore PvP players, but the game more than makes up for this shortcoming with its revolutionary Foundry system. For a free-to-play game, you really can’t go wrong with this one.