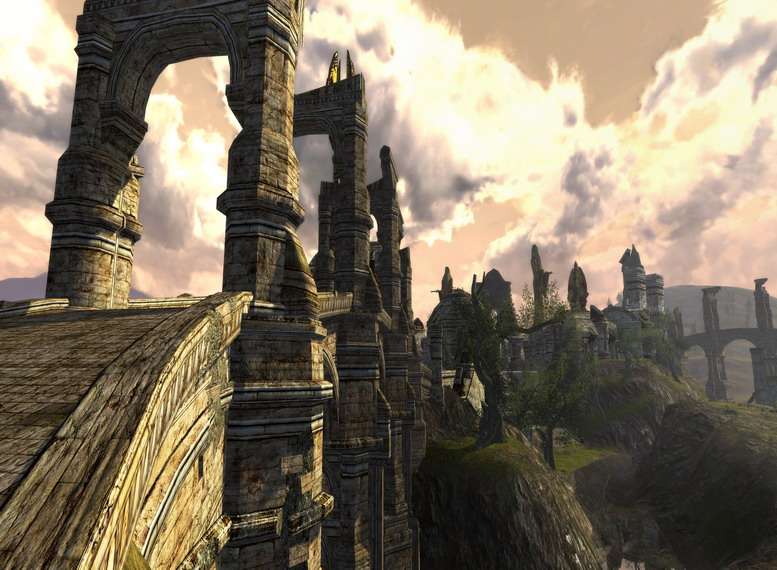 Lord of the Rings Online, also known as LOTRO, is a 3D fantasy MMORPG based on the epic works of J.R.R. Tolkien. Make your own epic journey across the vast lands of Middle-Earth in this story-driven, feature-rich MMORPG!

Lord of the Rings Online was originally a subscription-based MMORPG, but now allows players to get a taste of the iconic world of Middle Earth for free. That world has been massively expanded over the years with continuous updates. The winding depths of Moria, the wide plains of Rohan, the thickets of Mirkwood, and much else has been added through periodic expansions. While LOTRO only offers the option to create characters of the free races, a PvP mode called Monster Play allows players take command of powerful monsters in large-scale arena battles. For those more interested in making music than making war, Lord of the Rings Online includes a built in music creator and gives all classes the ability to play at least one instrument. https://www.lotro.com/en/game

LOTRO is a 3D fantasy MMORPG developed by Turbine and published by Turbine and Midway Games. It was released on April 24, 2007, and it is currently available through the official website and Steam. The game originally featured a subscription-based model, but has since adopted a F2P model with a cash shop and a VIP subscription option on September 10, 2010. It’s currently one of the most popular F2P MMORPGs. Let’s find out why. 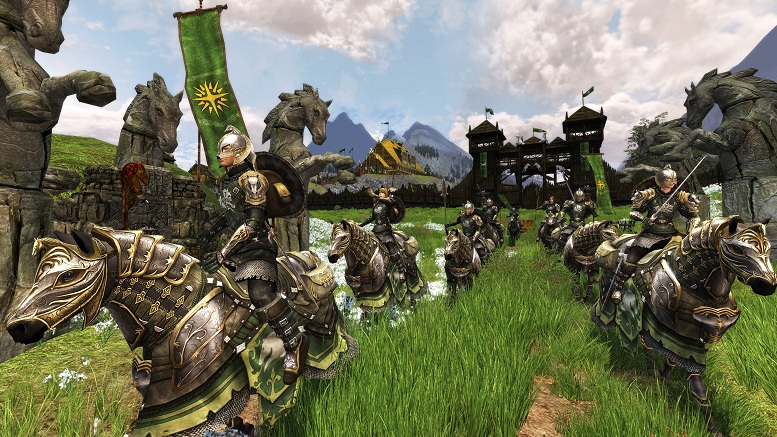 Lord of the Rings Online is set in Middle Earth, during the fantastic journey of the Fellowship as they try to take the One Ring to Mt. Doom. Players will be able to explore such legendary locations as Gondor, the Mines of Moria, the Shire, and Rohan. You can also meet famous characters from the books and movies such as Gandalf, Gimli, Frodo, and many others. Fans of Tolkien’s universe will find themselves immediately drawn to the game’s world.

The character creation screen in LOTRO is nothing special. You can choose between five races (Man, Hobbit, Dwarf, Elf, and Beorning) and ten classes (Beorning, Burglar, Captain, Champion, Guardian, Hunter, Lore-master, Minstrel, Rune-keeper, and Warden). The customization itself is fairly basic, though there are decent options for facial features. Players can also choose a character’s nationality, which will give them a title later on.

Once that’s done, players will go through an instanced tutorial where they’ll get their first chance to meet several iconic Lord of the Rings characters. As a dwarf, I met with Gandalf and Gimli, and faced a troll in a cave. Talk about setting the tone, right? However, things settled down after that, and I found myself faced with the familiar Everquest/WoW type of MMORPG. The controls are the classic WASD to move, mouse to look around and interact, tab to target and the number keys to cast abilities. Quests are tracked on the minimap, abilities are learned automatically upon leveling, and combat is fairly static.

Characters automatically learn both passive and active skills as they level up. To further character customization, you have class traits, virtue traits, and racial traits. Class trait points are earned by leveling up, and are spent in a talent tree, improving a character’s offensive and defensive capabilities. Virtue traits are gained by completing deeds and are used to enhance a character’s combat abilities. Racial traits are specific to the character’s race and they are usually earned by killing a certain number of mobs. These traits provide special skills or fast travel abilities. Both Virtue and Racial traits have their own talent tree. This system is actually quite in-depth and gives players a great sense of progression as they level up.

LOTRO is all about PvE, lore, and questing. To keep things interesting, LOTRO has a Deed and Title system. Deeds are similar to achievements in other games and can be divided into four categories: exploration, slayer, lore, and reputation. Different types of deeds are completed in different ways. Sometimes a deed involves killing a large number of mobs, and sometimes it involves exploring and completing an instance. Deeds also reward Turbine Points, which can be used in the Cash Shop. It’s great that LOTRO gives players free cash shop currency just for playing the game. You then have Titles, which are earned by completing deeds, or mastering professions. Titles are purely cosmetic, appearing next to a character’s name. For example, if a player reaches Level 5 without dying, he or she will earn the title, “The Wary”. 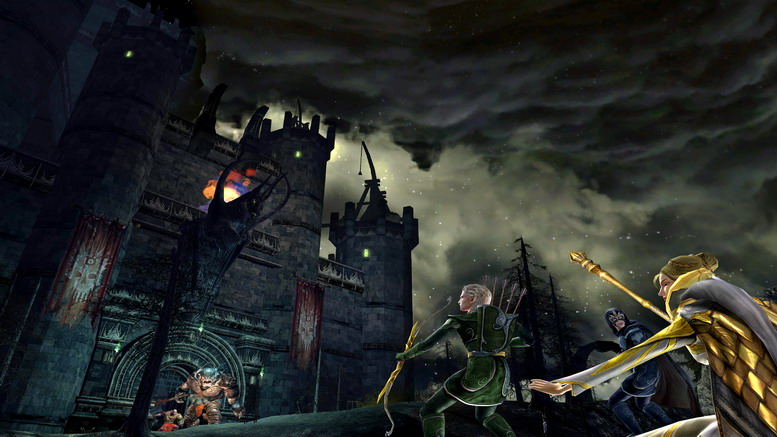 There is also a housing system in the game, which becomes unlocked at Level 15. Players will own a house in an instanced neighborhood that corresponds to their race. There are 3 types of houses available, with 2 of them being personal houses, and the largest one being available only to kinships (guilds). Too bad player housing is in its own unique instanced area. It’d be cool to see player housing in the persistent world, but as far as I know, Ultima Online is the only game to ever have attempted that. Finally, you have the reputation system, which is similar to the one found in WoW. Players can earn reputation with a faction through daily quests, killing mobs, or running instances, which then unlocks certain rewards, such as items, recipes, and various other services.

When it comes to PvE, you have quest instances, world instances, raids, public dungeons, and skirmishes. Quest instances are designed for one player or a small group, and they are used for storytelling purposes. The beginning tutorial is an example of a quest instance. World instances are designed for a small or full fellowship (party), and they have quests, deeds, and boss encounters within them. Raids are designed for two or three full fellowships (12-18 players) and they involve defeating large, powerful bosses for high quality items. Public dungeons are similar to world instances, but the main difference is that anyone can enter without the need for an invitation from the main group. Skirmishes are instances that can be accessed from anywhere in the world. Players join Skirmishes alongside their Soldier (a special Skirmish NPC). A Skirmish can take anywhere from 30 to 90 minutes and they can be adjusted for either solo, duo, small, or full fellowship, and raid size groups. 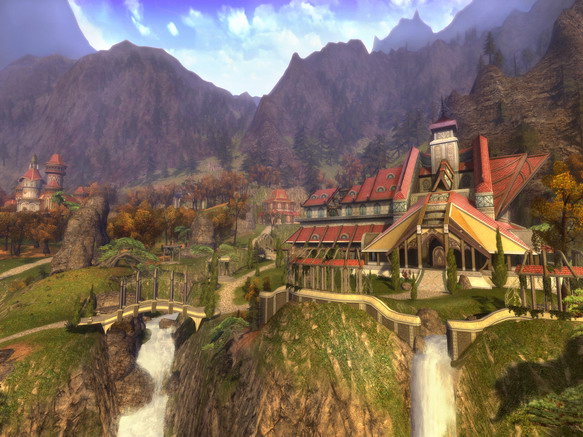 Lord of the Rings Online has a unique PvP system. Given that players cannot choose any of the warring factions, such as Orcs or Uruks, LOTRO feautres a system called PvMP (Player vs. Monster Player) or Monster Play. Monster Play is unlocked at Level 20 and players take on the role of either the Monsters or the Free Peoples, with the Free Peoples only being available to VIP players. The combat takes place in the Ettenmoors, where the heroes and monsters fight for control over 5 keeps. There are also 4 outposts in the Ettenmoors, and once one side controls 2 of them, they can enter the Delving of Frór, the public dungeon area beneath the zone. By participating in the fray, players gain ranks and commendations. There are 15 ranks in total, which progressively unlock better equipment for heroes, and better stats and armor for monsters. Commendations can be used to buy stat improvements, skills, and cosmetic upgrades.

While Neverwinter is largely focused on lore and roleplaying, it still has a PvP system available for players hungry for blood. PvP, however, is limited to arenas. Currently, Domination is the only available arena where five players fight for control of territory against five other players. The first team to reach 1000 points wins the match. Players are awarded Glory Points for participating in PvP matches. Glory Points can be used to buy PvP gear.

LOTRO features both a cash shop and a subscription option (VIP). By becoming a VIP, players gain access to all character trait slots, 500 Turbine Points/month, unlimited chat, extra inventory slots, custom character portrait frame, access to all quest packs and skirmishes, daily 100% XP boost, access to all monster classes, no currency cap, and maximum auction house listings, among other things, for $14.99/month. All of the benefits have a cumulative value of over $300. In the cash shop, players can find quest packs, instances, raids, skirmishes, storage slots, auction house slots, character slots, classes, currency cap removals, cosmetics, traveling, housing, buffs and boosts to both stats and in-game currency, crafting items, potions, travel options, dyes, mounts, and much more. Players purchase from the shop using Turbine Points, which as mentioned above, can be farmed by completing deeds.

While F2P players can certainly play through and get a lot out of the game, the Cash Shop does put a lock on a lot of content, which means that players will most likely have to pay if they want to avoid a lot of farming for Turbine Points. Aside from that, Lord of the Rings Online is a cozy adventure, worthy of the works of Tolkien. It’s definitely a must-play for fans of Middle Earth, but if the subject matter does little for you, you’re still left with a good game.