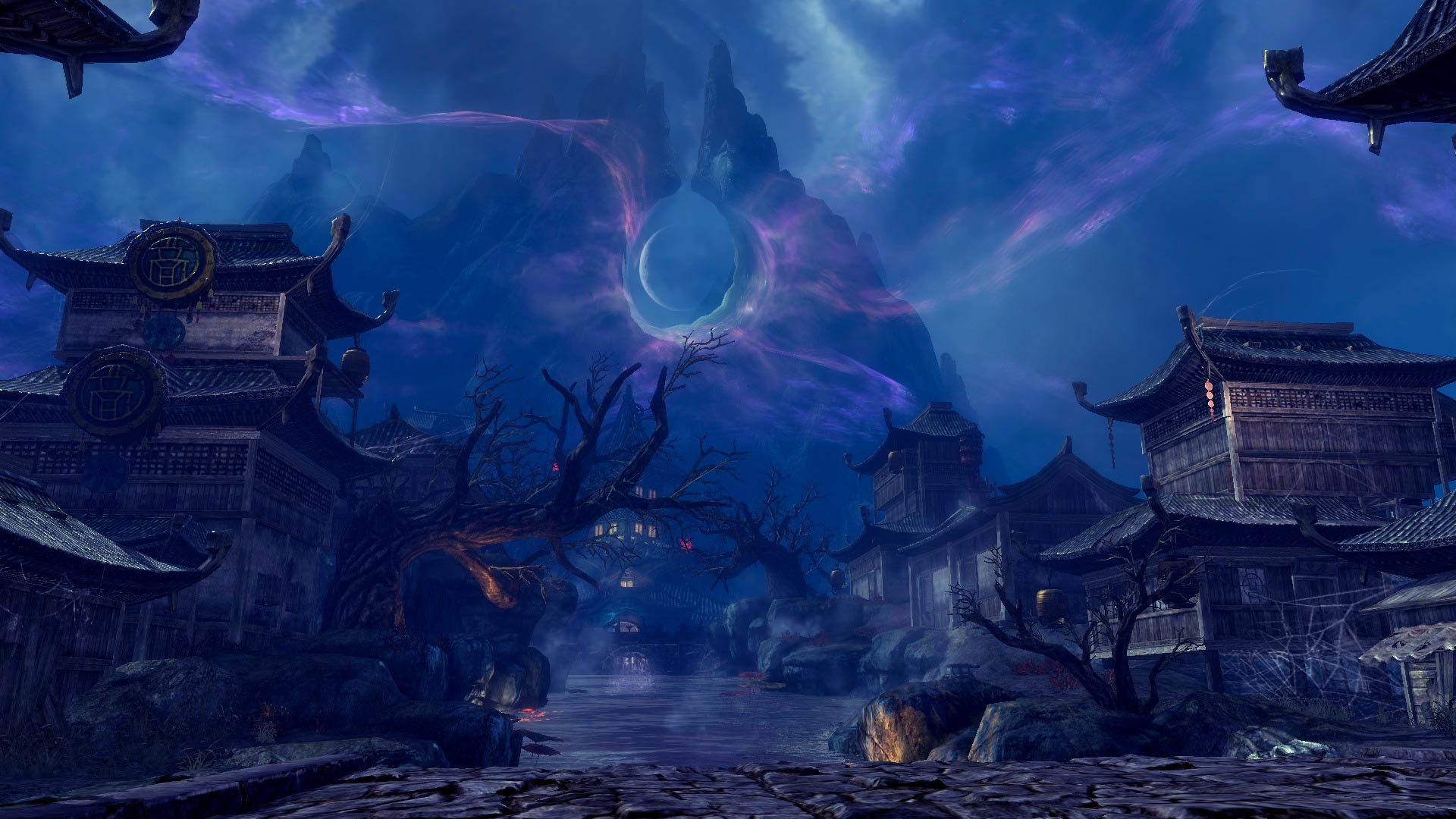 Blade & Soul is a 3D fantasy MMORPG with real-time combat in a martial arts setting. Players are expected to properly time their attacks and chain combos to maximize their damage potential. The game also offers lush environments and attractive character designs. Blade & Soul is a fantasy wuxia MMORPG featuring a range of martial arts classes in a vibrant world. Choose between four races (Gon, Jin, Kun, or Lyn) and 7 martial arts inspired classes. Customize your character to stand out from other players through a wide range of presets and sliders. Explore a world with unique environmental aesthetics, brimming with quests to level up from 1-55+. Engaging combat demands players chain skills together to combo opponents into submission, a mix of classic MMORPG abilities and arcade fighting games. Master your class and enter the arena to test your might in 1v1 or 3v3 combat, where twitch reactions secure victory. Or join a warring faction and attack enemy players in the open world so long as you’re wearing a factional outfit. https://www.bladeandsoul.com/

Three years after its Korean release, NCSoft’s Blade & Soul is finally gracing both North America and Europe. The game known for combining martial arts inspired combat and voluptuous vixens enters an MMORPG arena overflowing with choice. I’ve long wondered whether the delayed release would sentence Blade & Soul to purgatory, unable to compete with established titles such as TERA and Wildstar. But after playing I’m confident Blade & Soul will become the go-to MMORPG for countless players. 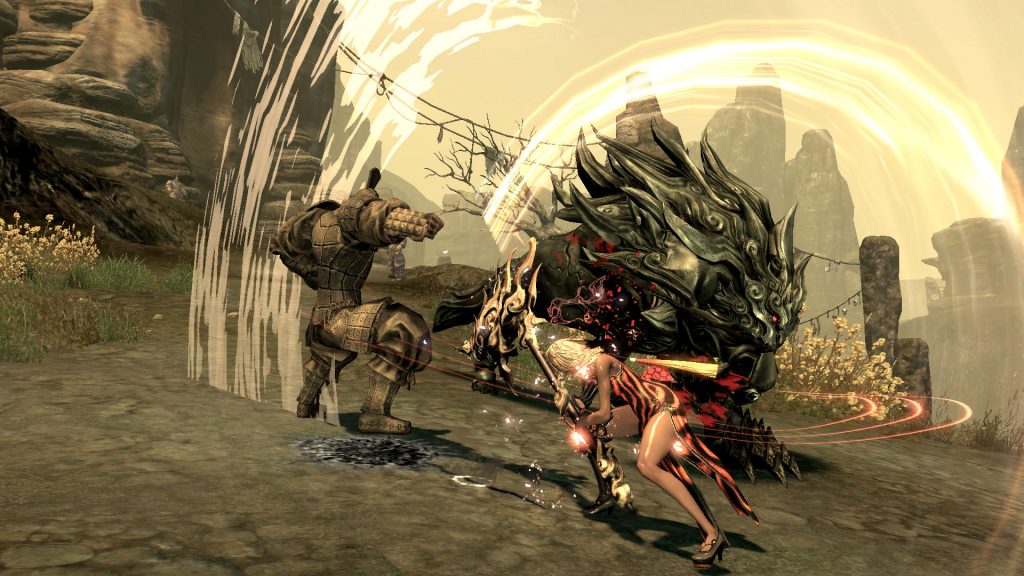 Blade & Soul’s titillating characters sell Tumblr posts for a good reason: they’re lustrous and spread across the gamut of possibility. Start by choosing between one of four races: the beefy Gon, lolita Lyn, amazonian Yun, or the human Jin. Races are limited to three classes each, some of which overlap (e.g. only Jin can play Assassin’s but both Jin and Yun can choose Blade Master). Character creation consists of a wide range of presets that are refined through sliders. To my surprise you’re not confined to a predetermined aesthetic, à la Black Desert Online. Instead, as with Perfect World International, crafting a character to turn onlookers to stone is entirely possible. Or, follow the crowd and create a Victoria’s Secret model.

I have to note that every time you change a hairstyle your chest pulsates like Kuato from Total Recall is trying to tell you a secret—as if my character’s breasts were having a seizure from each haircut. Characters aren’t perfect. By default Blade & Soul figurines have peculiar anatomies. I like Hyung-Tae Kim’s artwork, but something was added in the translation to the game’s character models. Some races are noticeably elongated as if characters were stretched on Emperor Nero’s torture rack. It’s personal taste, but I found it disconcerting. The models didn’t stop me from enjoying the game; it added to my immersion when I met player’s who pushed the character creator to its extremes.

Dropped into the ocean where The Old Man And The Sea is bewildered, players start the game through a series of flashbacks. Treachery has descended on the Hongmoon School and it’s up to the player to travel the world seeking vengeance. I’m not one for MMORPG stories but Blade & Soul presents narrative through flashy cutscenes inseparable from commonplace anime sequences. I appreciate the effort. Numerous NPC’s are voice-acted, but in many instances they fall flat. I worry I wasn’t captivated because the acting was like an early Saturday Morning cartoon—I’m a snob that can’t watch dubs. An option to play with original voice actors would be a welcome addition.

Not every NPC is voice-acted either. And the ones that are seem random. It’s not just recurring characters that speak, but some fish monger who needs you to slay wrathful hermit crabs, while his neighbor can only mime requests. It’s a bit odd and I can imagine that casting actors for non-important NPC’s drained a lot of time porting the game.

What’s most important in any MMORPG is the welling in your viscera as you slice random boars in two. Blade & Soul’s combat is a smooth chaining of ornate animations. Each fight feels like a choreographed scene from a John Woo film.

Skills are bound 1-4, Z-V, and the mouse buttons. Your hand is isolated to one area on the keyboard, bringing gameplay in-line with TERA and other action MMORPGs. It plays like Street Fighter and an RPG were thrown into a blender. Chaining skills properly procs new skills (bound to F and Tab) that can be employed tactically to maximize damage. As an assassin I could lay down a mine, swap places with my victim, detonate the mine, shadowstep, stun, and knock out Disgruntled Kung-Fu Masters. 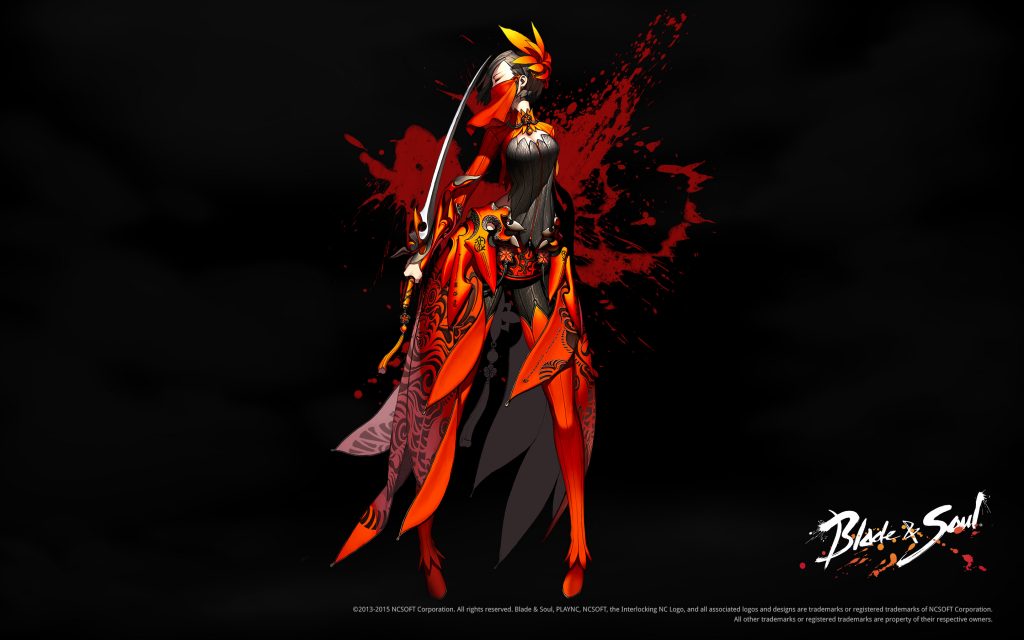 The system is engaging, keeping players on their toes as they chain attacks. You don’t necessarily move as you strike (at least as an Assassin), but you use abilities to counter and circumvent enemies. Knowing that an axe is set to clash with my face I activate parry and stuck a knife between the enemy’s spine. When I eat an attack it doesn’t feel undeserved. There’s some movie I should have employed to minimize damage. 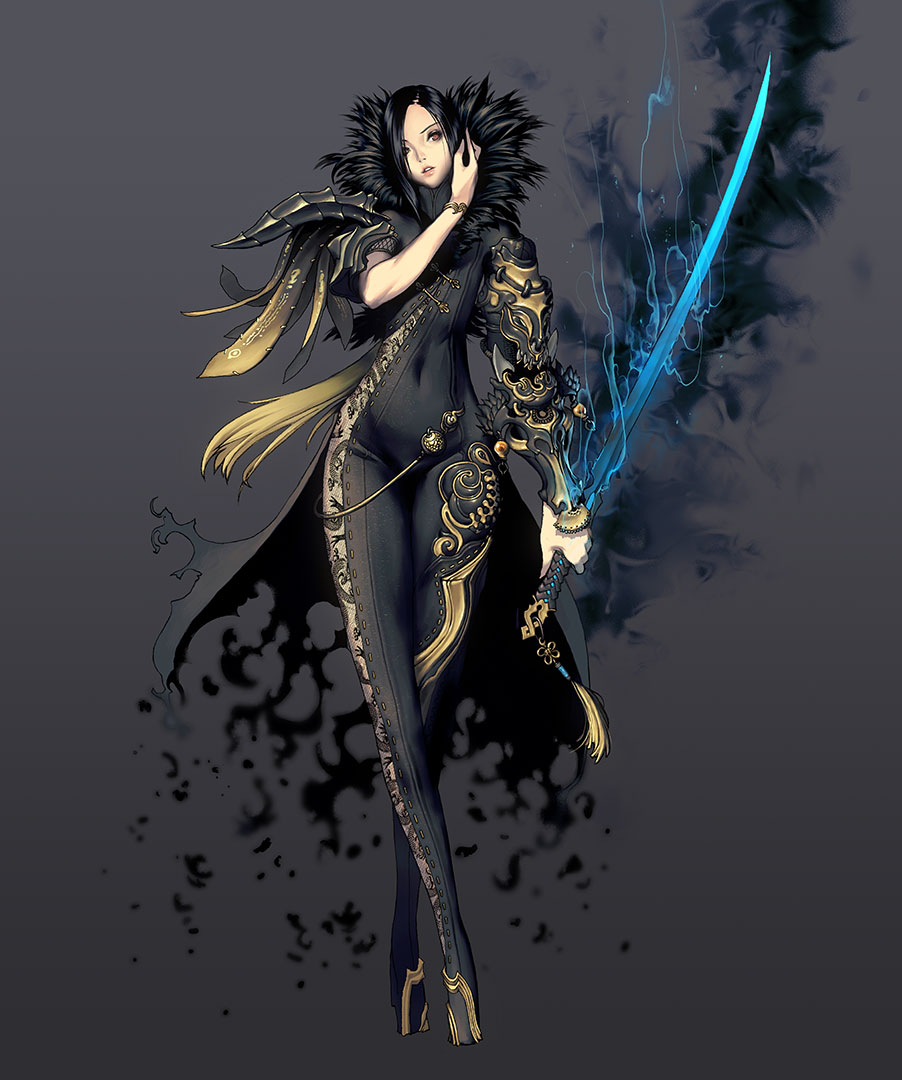 Leveling is a superfluous grind. But the repetition isn’t a 9-5 job (as with Devilian). It’s broken between open world PvP, storyline anime sequences, item roulette, and dungeon crawling. There are enough systems in place, even at lower levels, to break the monotony. You can spend time killing a world boss for a chance to spin the Wheel of Fate—fingers crossed for a risqué outfit—or upgrade your weapon by feeding it junk items.

But leveling is themepark style questing, moving from one Epcot station to the next—killing, retrieving, and exploring; a largely single-player experience. The world is a series of linear paths interconnected by warp portals. While aesthetically distinct, and visually impressive, many elements feel recycled. Every cave-crawl quest sends you down the same dusky path. Every village asks you to perform the same menial tasks. Zones are confined to a theme—forests, deserts, villages crawling with peasants—until a bottleneck squeezes you into the next quest area.But dungeon crawling with friends makes the grind tolerable.Blade & Soul’s party play is largely three DPS classes tackling a mob, but that doesn’t mean spamming is viable. Group content is refreshing. It throws away the formulaic holy trinity, and forces tactical communication. Without dedicated healers and obvious tanks, players are responsible for themselves and reliant on each other.

In many cases a stun or knockdown must be applied twice in quick succession. While some combos won’t proc without groupmates activating their own skills, forcing an interdependent dynamic. Since you’re rotating crowd control and optimizing combos VOIP is indispensable. I wasn’t bored leveling. It’s not an Eastern grind like Tree of Savior. Combat quenches your thirst, and a deep sense of paranoia kept me on the lookout for enemy players.

Not since World of Warcraft have I been so happy with world PvP. Players wear outfits belonging to opposing factions and turn NPC outposts into Battle Royale. Upon respawn you can choose to discard your outfit to exit PvP but why would you? It’s a fantastic means of bridging the gap between PvE and PvP players, placing them in the same world. Conceptually, the mechanic could be a simple flag. But outfits create a turf war where players wear a bandana to represent Grove Street.

And then there’s Arena PvP, a complex brawl that’s as entertaining to watch as it is to participate. I suspect Blade & Soul’s twitch combat focused on outsmarting opponents will draw even non-MMO players to streaming channels. Ranking systems match players together of equal weight, and weapon’s don’t matter in the arena. Whether you use a broken stick or Sun Tzu’s blade you deal the same damage. It balances PvP (to an extent) and emphasizes player skill over gear.

It’s presentation is not without flaws. Your character’s feet never reach the floor; maybe chi keeps your shoes afloat? And the user interface, by default, detracts from the environment. Resizing every element from the menu calmed my nerves, but I preferred to play with the UI turned off when possible, by pressing Ctrl + X.

Blade & Soul is packaged with a hefty cash shop, dependent on NCsoft’s cross-game currency NCoin and in-game earned points. It includes the expected spectrum, from sybaritic costumes to experience boosters and crafting materials. But I wanted VIP status. I decided to buy $20 worth of NCoin, 1600 coins to activate premium membership for 30 days. Even though 30 days costs 900 NCoin, pricing jumps from 800 NCoin for $10 to 1600 NCoin for $20—thanks NCSoft. But premium membership doesn’t include the range of available perks. Many still have to be earned. Blade & Soul has 10 premium membership ranks. Rank 1 applies immediately upon purchase, and players earn subsequent ranks by accumulating premium points, spending both NCoin and Hongmoon Coin. Higher ranks increase bonuses, such as reducing recovery upon death from 20 seconds to 15 seconds at rank 9.

Earned bonuses are not game-breaking and focus on convenience and spectacle, such as additional gold earnings from combat and “class-specific dazzling windwalk.” It’s not a system I endorse. If I pay for a premium subscription I want premium perks, or at least the option to purchase the full set. It’s my hope Blade & Soul is not setting a new precedent, and seems designed to motivate heavy spenders when whales are on the fence about clicking the buy button. 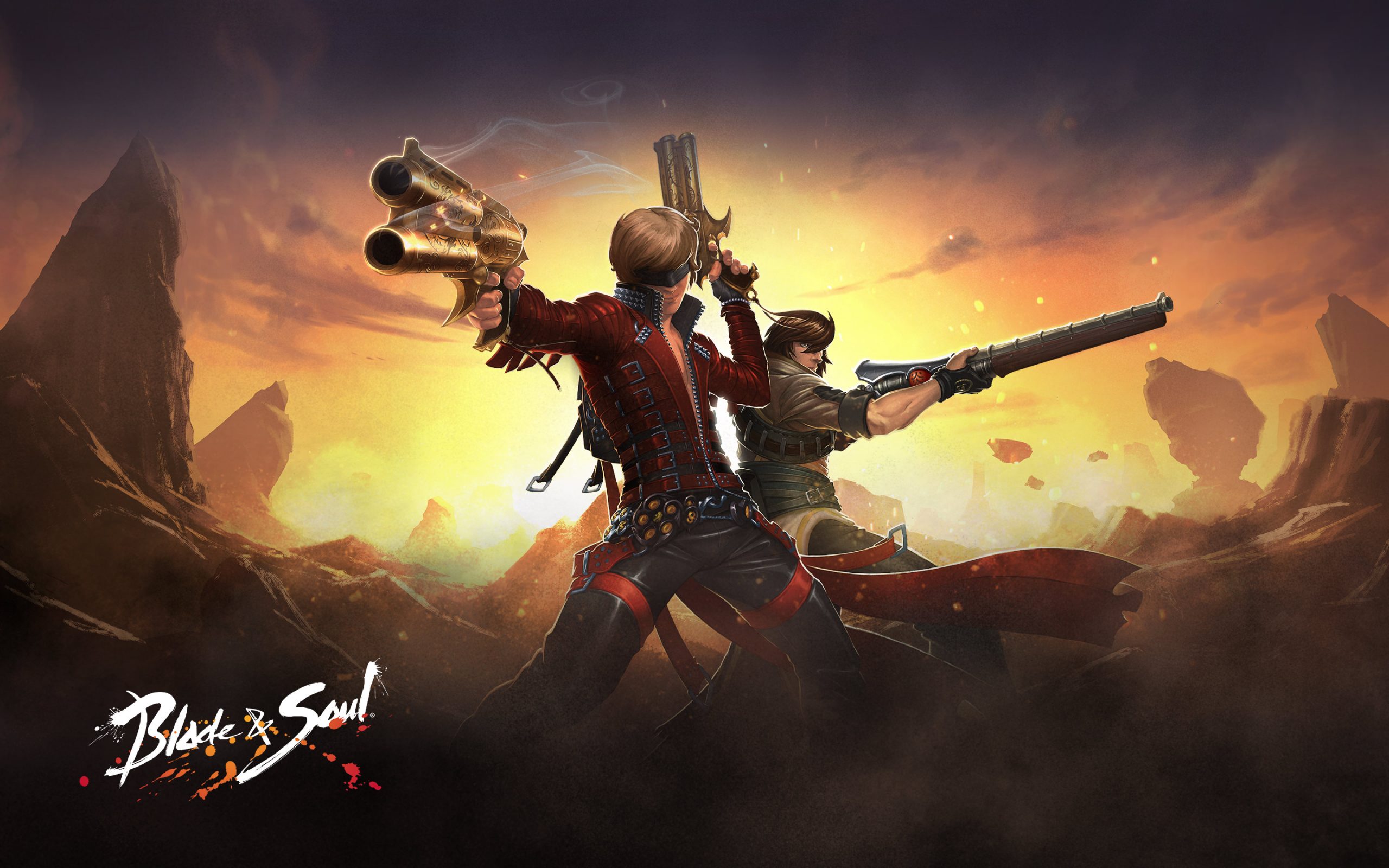 NCSoft has been sure to inconvenience free-to-players to motivate casual purchases. I loathe commodified bag space, and thanks to some items non-stacking I spent too much time salvaging to free up space. You can unlock slots by selling gold and participating in events, but it doesn’t excuse limited bag space that typically overflow with items; I consider it a scummy tactic. In addition there are scrolls that require keys to be unlocked, most conveniently purchased from the cash shop.

The Foundation Is Brittle

Blade & Soul suffers from Founder’s Packs antics. The Founders Packs start at $24.99 for the basic Initiate package and rise the charts to $124.99. The highest package includes many of the necessities you would expect to find in a pay-to-play MMO such as additional character slots, bag space, and the quality of life enhancing Premium Service. While you get a fairly good deal for the money in comparison, the $124.99 founders pack suffers from a problem that most packs don’t have. The exclusive skins, outfits, bagspace and amenities you receive only apply to a single character on the account, diminishing its value. You’re spending $124.99 one avatar, not the account. If you want to reroll you’re screwed.